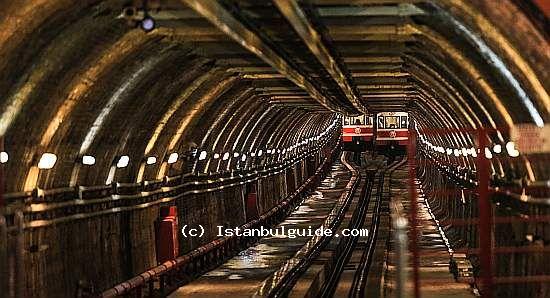 Being the second oldest subway in the world after the London underground, Tunel, a short funicular system between Pera and Galata, today’s Beyoglu and Karakoy, completed on December 5, 1874 and started on January 17, 1875.

The system was designed like an elevator from Galata at the sea level, to Pera on the uphill. The French engineer, Eugene-Henry Gavand came to Istanbul in 1867 and presented the project about Tunel to Bab-i Ali (Ottoman Porte) seeking to obtain special rights, a concession in order to operate the tunel for forty-two years. In the beginning of 1870, he went to France for finding the capital for this project. On September 1, 1871, he established “The Metropolitan Railway of Constantinople from Galata to Pera” , “Pahidaht Demiryolu Sirketi” in Turkish, after his dealings with the United Kingdom. In 1874, Gavand was dismissed and the British control in the company with the special rights continued. Although the company obtained a new 75-year concession for operating the Tunel in 1904, with the end of the Ottoman Empire, the Tunel was nationalised in 1923 by the Republic of Turkey. The Tunel with 573 metres long, was renovated in 1971. The wooden carriages were replaced with electrified steel wagons.

As the journey is only 1,5 minutes, the Tunel, is still, very functional since then and an interesting experience. Located at the end of the Istiklal Street, the cafes and bistros around Tunel are also frequented by both locals and tourists.