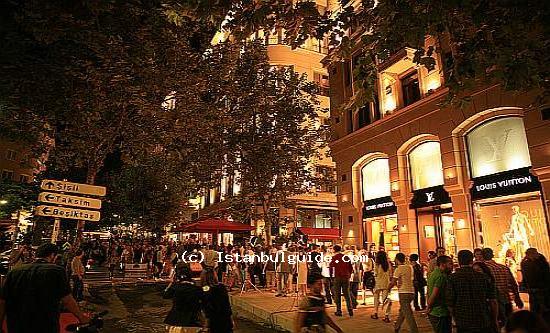 Within the district of Sisli, Nisantasi offers a very sophisticated atmosphere with trendy restaurants, cafes and shops mostly visited by the Turkish celebrities. Lined with world-known brands such as Chanel, Gucci, Louis Vuitton, Prada, Dior, Hermes, Giorgio Armani, Cavalli, Burberry and more, Abdi Ipekci Avenue (Abdi İpekci Street), is ranked among the world’s most expensive with its high rental rates, The street named after the famous journalist Abdi Ipekci, who was killed by Mehmet Ali Agca in this street in 1979. The murderer, then, was well known with his attempt to kill Pope John Paul II. A memorial is located in the street.

Although the shops are scattered through the popular Abdi Ipekci Street and Tesvikiye Street, the only shopping mall City’s is also highly preferred by the shoppers, having a range of popular brands with the latest collections.

Atiye Sokak (Atiye Street) is a very trendy street with tasty bistros and restaurants. Enjoy sipping your coffee at a pavement table and watching the people come and go.

The art-nouveau-styled apartments in Nisantasi give the quarter a very nostalgic look. Tesvikiye Mosque is also eye-catching with its neo-baroque architectural style. Completed during the reign of Abdulmecid I, the front facade of the mosque has strong European architectural influences.

The charming Nisantasi is located on the European side of Istanbul, close to Macka and Osmanbey and a cab away from Taksim and Besiktas.