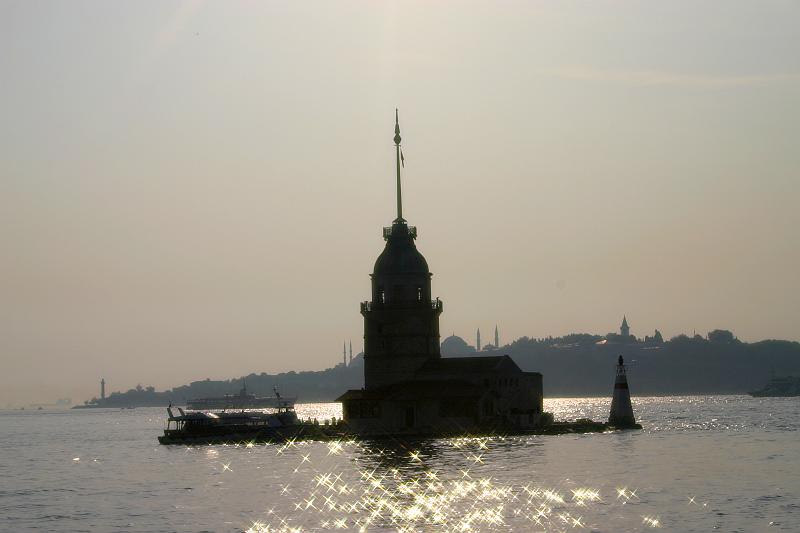 Maiden’s Tower sits on a small islet located in the Bosporus strait off the coast of Uskudar in Istanbul has become one of the symbols of Istanbul through the ages. When it was built in 408 BC by the ancient Athenian general Alcibiades, it was used as a watch tower for the Persian ships, a lighthouse for centuries and also a customs house. But in these days it serves as a landmark for ships entering the Bosporus since last century and has been transformed into a popular cafe, gift shop and restaurant which is open from 12.00 to 19.00, six days a week (except from Mondays) the year round, with an excellent view of the former Roman, Byzantine and Ottoman capital. Restaurant is on the first floor, cafe is on the top floor and both are more expensive than regular cafe and restaurants. Several times a day you can find private boats which make trips to the Maiden’s Tower. It gives you a 360° view of Istanbul which makes your visit to the Tower one of the most memorable experiences of your life.

According to legend once upon a time, a oracle makes the prediction to the King that his daughter will die as a result of a snakebite on her 18th birthday. Thereupon, the King who loved her dearly has a castle built in the Sea of Marmara in order to protect his daughter from snakes. Time passes and the girl grows up in the castle. When she is 18, her daddy sends her a big fruit basket as a birthday gift. However, the prediction made by the oracle was inevitably comes true as a snake hiding a fruit basket carried to the princess bites and kills her on her 18th birthday.

In the movies such as “The world is not enough”, “Hitman” and Turkish drama “Kurtlar Vadisi” The Maiden Tower was featured. It also features in just about every work of art on Turkey. Framed in paintings and pictures, it has many compositions dedicated to its glory.