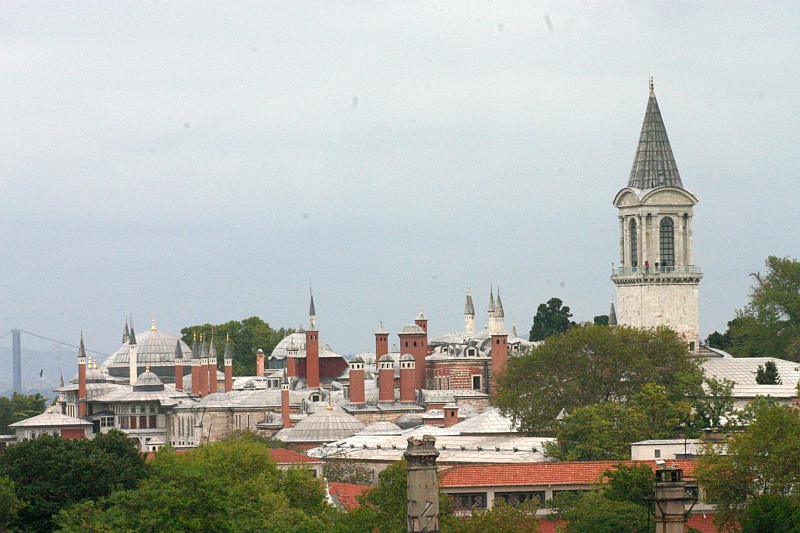 The Museum is open between 09:00am - 05:00pm but closed on Tuesdays. The palace complex is located on the Sarayburnu, overlooking the Golden Horn and the Sea of Marmara, with the Bosporus in plain sight from many points of the palace. It is located on very large land which is surrounded by 5 km of walls. Harem part which can only be visited by purchasing an additional ticket and only can be visited by guided tour is closed at lunchtime. If you want to see Topkapi Palace all, be sure to save at least a morning to see it.

Visiting Istanbul without touring the Topkapi is like visiting Paris without seeing the Tower of Eiffel. Because of this, the Topkapi is ridiculously crowded and more expensive compared to other attractions in Turkey. Topkapi Palace was more than just the private residence of the Sultan and his court it was virtually the hearth, the brain and the centre of Ottoman Empire. It was the imperial palace of the Ottoman Sultans for over 400 years and today it is one of the most fascinating and also evocative monuments and museum of works of art and priceless artifacts since 1924 in Istanbul. Under the direction of Ataturk, Topkapi was turned into a museum.

Topkapi palace was built with the order of Mehmed the Conqueror, after 1479 in 14 years and later Sultans have made additions and annexes. It is the second palace in Istanbul which was built by Turks. It is quite different from the European concept of a palace. It has 4 courtyards and all they connected to one another by monumental doors.

The first courtyard is entered through the imperial main gate. In the first courtyard, there were a hospital, arsenal, a state mint, bakery, a part of the treasury and the outer service which was open to public. Hagia Eirene is the first one that you will see when you enter to the court and then The Tiled Lodge (Cinili Kosk) is also inside this court.

The second courtyard was open to people who had business with the council and it has Harem section as well. No one from the outside world was permitted to enter the Harem which is made up of about 400 rooms scattered around small inner courts. While visiting these empty rooms and the gloomy corridors, the visitor needs to work his imagination exhaustively to visualize the Harem as it was in its heydays. The Harem room was a place for the Sultans to have sexual activities. The tower in the second courtyard was used to watch the whole city and the port and the only entrance to it is through the Harem. The Ottomans kitchens in palace are converted into gallery. The gallery displays the finest collection of the imperial Ottoman Empire. In this part you will see gifts from other empire, the collection of Chinese porcelain from the Ming dynasty, Japanese porcelain, silverware, crystals and all others.

The third courtyard was reserved to the Sultan's household and palace children and on the eastern corner of the third courtyard The Treasury consists of four different halls. The Treasury room is a collection of the most expensive diamond. These rooms were used as a suite of reception rooms by some of the sultans. It has wonderful jewelry and treasure pieces, incredibly valuable. The library of Ahmed III is located at the centre of the courtyard. In the last section there are relics of the Prophet Muhammad, including a tooth, a strand of his beard, his footprint, the swords, the bamboo bow and chest of the Holy Mantle. The display of the black stone with the golden cover is the black stone which fell from heaven within the Kaaba. One of the oldest Koran written on deer skin and the relics were brought to Istanbul when the Ottoman’s assumed the Caliphates of Islam is displayed in chambers. There are also many other relics.

The fourth courtyard was exclusively reserved for the Sultan's use. The only wooden pavilions in the palace are found in this courtyard. It has also a gold plated bronze canopy and next to it is the circumcision room which has tile panels decorating the wall.