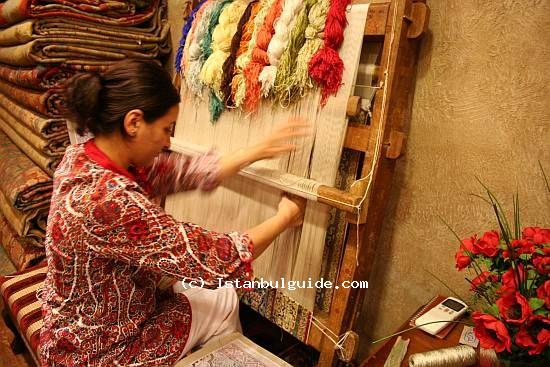 Carpet: Turks have a special attitude towards the arts such as carpet weaving.

The oldest known carpet on the world which contains 347.000 knots per square meter (255 per square inch) is more than 2500 years old and wove by Turkish people in double knotted style. It was discovered in the grave of the Altai Mountains in Siberia by Russian archaeologist (Rudenko) in 1947. Today it is exhibited in the Hermitage Museum in Leningrad. It is clear that Turkish women have been weaving carpets for a long time. Turkish carpets are very beautiful and also durable floor coverings still today. No one knows precisely when and where the technique of weaving first started but there is no doubt that the weaving art, in general, is started in Central Asia by nomads. As a first they learned the flat weave technique to use goat hair in the making of their tents. Over the period of time they began to use same techniques of flat weave for making of floor coverings to isolate themselves from the humidity and then they used them as saddle bags for horses and camels, blankets and many more additional uses. They called them as a “kilim” and designs of kilims reflected stylized depictions of the worshipped symbols of pagan religion. After kilim they started to add pile to the basic flat weaves and began to weave rugs which were very supple. Nomads used these rugs during their long voyages as sleeping bags on horse’s back. Turkish people were nomads and came from Central Asia to Anatolia in 1071.Because of environmental, sociological, economic, and religious reasons, art of carpet weaving widespread from Central Asia to Turkey. Seljuk Turks introduced hand woven carpet techniques to Anatolia in the 12th century. Turkish carpets are never same; each one is a creation from a new and unique. At a glance maybe two carpets can look similar but closer examination reveals the subtle differences. This specialty gives each carpet its own individuality and charm. As a material they mostly use wool on wool (wool pile and wool warps and wefts), wool on cotton (wool pile on cotton warps and wefts) or silk on silk (silk pile on silk warps and wefts). Carpets can be made mostly with natural or sometimes chemical dyes and natural dyes are more expensive than chemical ones.

The Ministry of Culture sponsors a number of projects to revive traditional weaving and also dyeing methods in western part of Turkey because of fearing that old carpet making methods would be lost in future. In Istanbul as well as Turkish Carpets, many carpet sellers sell pieces from other different countries such as Iran, Afghanistan, Azerbaijan, Uzbekistan and Turkmenistan.

The difference between Turkish and Iran ones is knotting style. Turkish ones have double knot technique and others have single knot which is Persian knotting style. Also Turkish ones tend to have a higher pile, more dramatic designs and more varied colours than others. Carpets made today mostly use traditional patterns such as the commonly used eye and tree patterns and incorporate all sorts of symbols. Still today in Turkey, villagers weave carpets for their dowry and own family’s use. In Istanbul, there are various shops that you can purchase a Turkish hand-woven carpet and many palaces which are open to visit that you can see nice Turkish carpets on floor.

They are very colourful and nice for souvenirs and gifts. Handmade ceramics carry the signature of its maker.

Beautiful handmade tiles may be seen in quantity in the imperial and religious buildings of Istanbul today, because after the conquest of Constantinople in 1453, the Ottoman sultans started a huge building program. For example The Sultan Ahmed Mosque in Istanbul (the Blue Mosque) contains 20,000 tiles which are still shining. The Topkapi Palace and The Rüstem Pasha Mosque, the Tomb of Hurrem Sultan, the Tomb of Suleyman I, the Mosque of Sokullu Mehmed Pasa, the Mosque of Piyale Pasa and the Valide Atik Mosque are also tiled.